Can We Guess What Buyers Dislike When Looking at Pics?

Can We Guess What Buyers Dislike When Looking at Pics?

You list your home with an agent who you think is good and your home goes live on MLS and you get no showings for first week. Then you decide to search your property online and see what buyers see and that’s when it hits you. Your agent did not hire a professional photographer because they only charged you 3.5% commission so now you are the one that will suffer and have your bottom line impacted in a negative way. 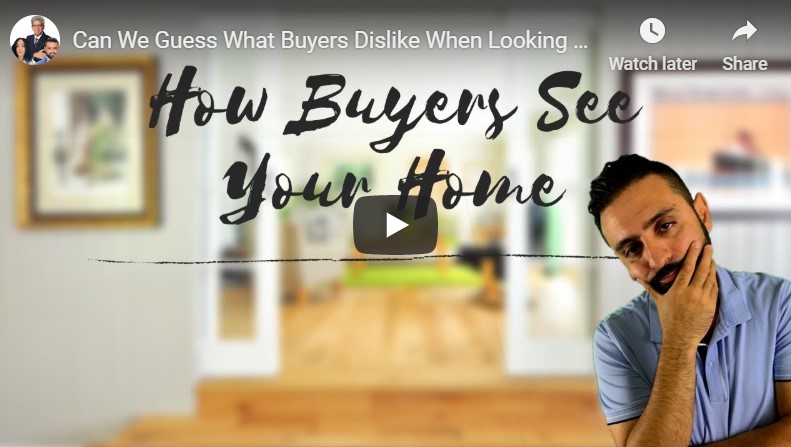 Today we wanted to talk to you about what buyers are looking for when they look at the pictures for your home. 80% of buyers start their home search online. If you don't have appealing pictures, you're not going to stay ahead of the competition and there is a lot of competition. So, make sure your pictures look really, really good.

Having professional photography is one thing, but to get the home star, get the home ready for photography is a whole different thing. The number one thing that will get your home eliminated from showings are colors. A lot of buyers’ least favorite colors that I've seen have been red, a yellow and orange colors. And you know, there's nothing wrong with these colors.

It's a preference thing, but we want to kind of appeal to the majority, not the minority. And the majority tend to like very neutral colors. So, stay away from any dramatic colors. And this includes furniture and bedding. The classic pictures are sort of the classic colors that have always kind of stayed in style, have been neutral colors, like beige or kind of off white. Now the new trend is gold and bronze. We'll see how long that lasts, but that seems to be the winner these days.

The second one was popcorn ceiling. Now a lot of builders unfortunately still put popcorn ceilings in the homes that they build. And I don't know why. And you know, believe it or not, buyers notice it very quickly. It's not appealing. It's not pretty, and it's tough to get out. Builders please just give people smooth ceiling and stop using popcorn ceiling. It's cheap and it doesn't look good.

The third one is we don’t see often, but we do see it in a lot of older homes and older areas that have classic homes. This is those Hollywood looking vanity lights. And this is super dated, and it's not really attracted to today's buyers. Light fixtures and hardware are really cheap and inexpensive ways to update your home and kind of give it a fresh look. Even places like above the Island or a chandelier in the dining room can make a huge difference in the way that it'll make the pictures look. And even when a buyer walks through the home and most places sell light fixtures out a very reasonable price now.

It's a great way to kind of give a new look. Now, this one point is for showings, not particularly for pictures, but we want to throw it in there because it's important but stronger, bad odors. A lot of homeowners unfortunately don't realize because they've been living there. They've just gotten used to, but it's important to have a professional point these things out. Getting those air fresheners with vanilla or lavender and all those spray wines. If you try to mask the odor too much and kind of fill the house with all these sprays, it'll seem like you're trying to hide something. The best thing is to just leave your windows open. Of course, if it's not too cold, then just try to air out the house and maybe bake some cookies. These tends really do the job.

Pet odor and hair are another thing to consider. Majority of the population has pets and you know, we love them. But the thing is that some people don't, and they do kind of over the years bring in a particular odor and a lot of pet hair. A lot of people are just used to it because they've been living with them for so long, but they don't realize how strong the odor is. And it's thought just the smell some buyers don't like, but it's that some people are allergic and very rarely very allergic. We don't want to scare those people off. And some people are badly allergic to certain types of fragrances. We really need to take that, those things into consideration and make sure that the smells that we're putting into the house don't scare people off.

And the last thing is pretty obvious but it's the most common one is a clutter. This is the most common one and sellers don't see it because honestly it's pretty normal to live with some clutter at least most people and some people just live with a lot more clutter but that's just the way it is. You don't notice it over the years because you've been living in the house and you just kind of accumulate things and put them places. Not many people live in a stage like home, but you may not notice it when you live there. It definitely shows in pictures. You will see it in pictures if you rent. If you randomly just walk around your house, I'd take pictures of certain homes and look at it, you'll realize you do have clutter.

It's a good test to know how much clutter you have. We get a stager to give tips on decluttering. They come in and they'd have a look at that house and give you guys some tips on while you can do clutter, how to start. And one of the tips that they usually give is because sellers that tend to feel really overwhelmed, um, it's a lot of work. We get it, but it'll make a huge difference. But the thing is that you need to start room by room. Start with one room, move to the other one. See every room is a different project rather than seeing the house as a whole. A lot of people tend to throw things in the closet. And the perception is that, who's going to look in the closet? Well, actually a lot of buyers do. When we're just stuffing everything in the closet, we take away the appearance of what the space actually is in the closet. And a lot of buyers want to know how big or small closet is, and you know where they're going to be able to store some, some of their things. Don't put it in the closet, box it up, and just kind of store it away somewhere else.