Toronto is going to crash just like Vancouver. That’s what some of the media were saying but what’s really happening! 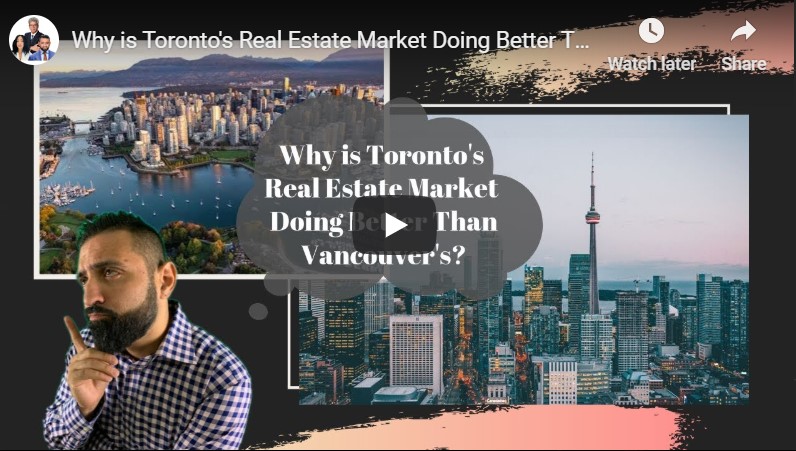 One of the reasons, basically after the correction we had in 2017 in Toronto, Toronto prices kind of went down, especially in the suburbs like the York region. They went down quite bit in the York regions especially. Vancouver also went down, but they had the stress test and all these things, but what happened with Vancouver last year that had a 31% plunge. Their market went down 31% and Toronto kind of recovered. It's stable. It's more stable. So why do you think that happened?

There's a variety of reasons and the reality is Vancouver just the whole market was driven more by foreign investors. As soon as the 15% tax or all these rules about vacant properties and stuff came into play, Vancouver didn't really have much of a market anymore. And another factor is Vancouver's prices were just way more inflated than Toronto was and there really wasn't much justification. Toronto is a much bigger city, way bigger population, growing much more in size, so people just at one point, the bubble burst in Vancouver. It wasn't able to stabilize.

There's been a lot of reports that there's a lot of money laundering happening. There's a lot of properties being purchased under holding companies and they don't know who they are and they're vacant, or family member names. Mostly condos and luxury properties. That's pretty much one of the other reasons. There's other banking policies and other reasons, but in Toronto it's more driven. There's not as many foreign investors as they were speculating in the beginning. It was mostly Canadian investors, mostly people living in Ontario investing their money back into real estate.

A lot of people who own properties refinanced and bought second, third, fourth properties for rental purposes. So, it really was a lot of domestic buyers as well.

And there's a big population growth, big economy growth, lots of jobs. Toronto seems to be moving the right direction.

The Toronto MLS® requires registration to view all homes currently for sale.
(Prices and inventory current as of June 30, 2022)